I’m on the internet a lot. People think my job is hanging out on Facebook and Twitter and finding hilarious things for them to laugh at. I won’t go into it now (get excited about lots of work talk later) but that’s not all I do. Some times, when the mood strikes me, I enter a competition. That’s right kids, when you are on the pulse of social media, you can win free stuff, which is awesome. Because everyone loves free stuff. 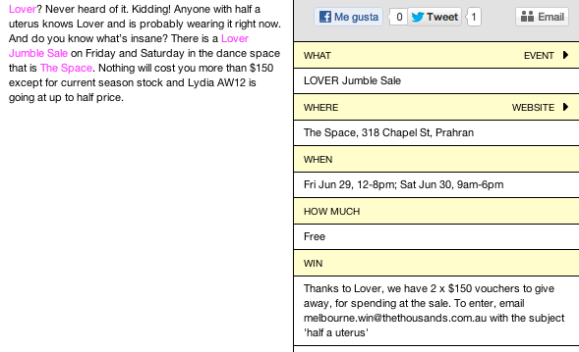 Anyway, the sole reason I entered this competition was because they asked me to send an email with the subject title ‘Half A Uterus’. It was an awesome tagline and because the person who was running the competition sounded hilarious and someone I would probably enjoy. I entered.

2 thoughts on “Half a Uterus.”

Processing…
Success! You're on the list.
Whoops! There was an error and we couldn't process your subscription. Please reload the page and try again.
%d bloggers like this: